The world’s first national experiment in which citizens have a say in national spending - A general national participatory budget, one for Youths and one for Schools - 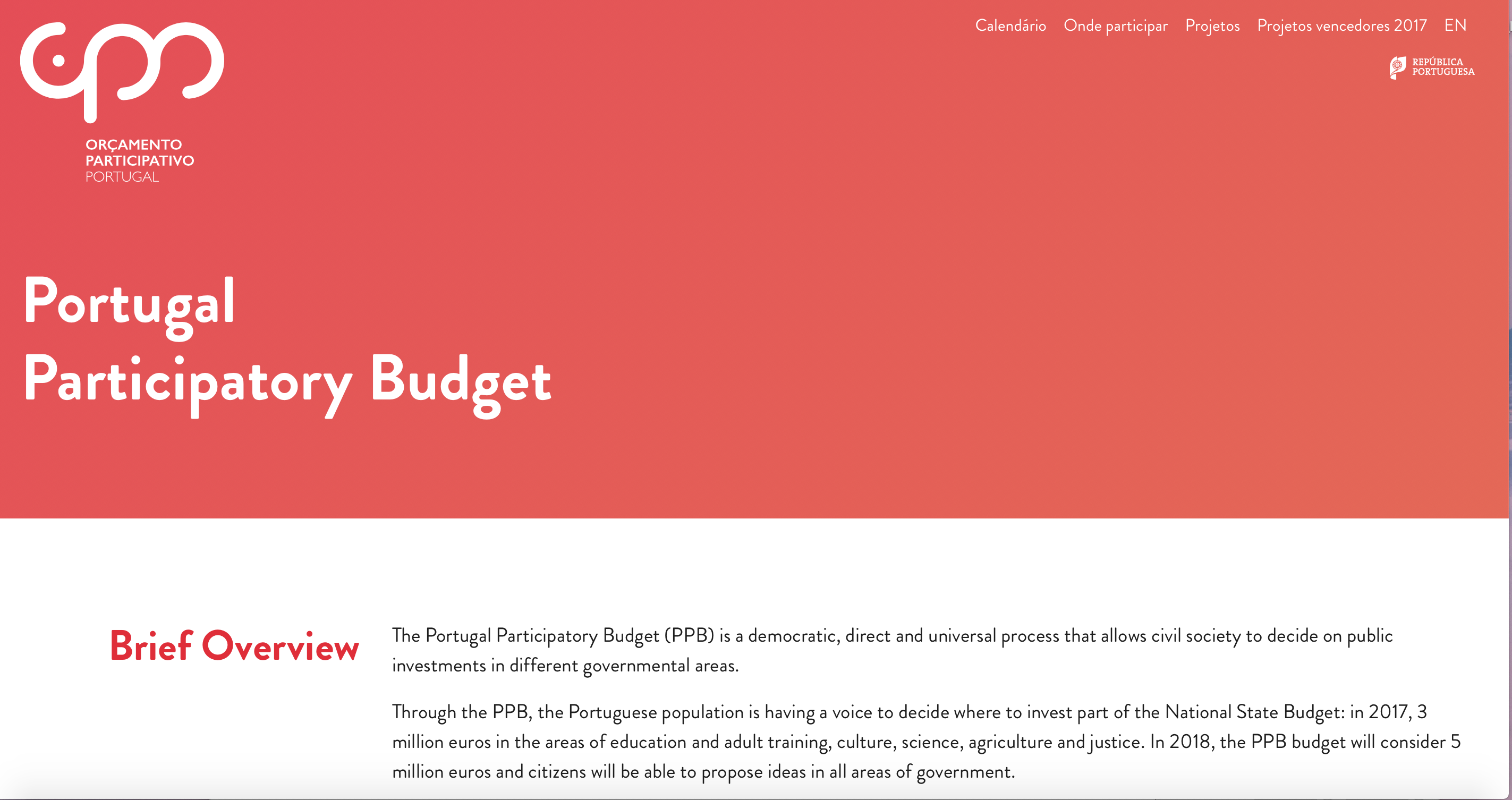 Municipalities in Portugal have been practicing citizens’ budgets since the early 2000s. Today Portugal is world champion in the number of municipal participatory budgets.

A participatory budget (PB) usually is part of a local budget reserved for citizens to decide on. Specific structures and processes guide through the proposal, deliberation and decision-making phases.

Portugal’s experience led to its ambitious goal: Becoming the first country in the world to also have citizens decide on part of the national budget.

In a 2018 interview, Graça Fonseca, then Secretary of State Assistant and of Administrative Modernisation explained the objectives of this experiment: „To bring people closer to politics, as well as promoting a deeper connection and integration between territories through projects at the national level.“

Portugal launched its first nation-wide PB in 2017 with three experiments at once: A general PB, one for Youths and one for Schools.

The initial NPB’s three million euros in 2017 were raised to five million in 2018.

A government team travelled the country and the autonomous regions to hold participatory meetings.

Amongst the winners were cultural projects, such as the 35 km long educational, culture and ethnographic Route da Arcês or the book donation platform Livrar.

Other winning examples are initiatives in health education or education and science such as an eco science project.

Portugal’s Youth PB for citizens between 14 and 30 years of age aims at encouraging young people to take part in political processes, whilst learning the ropes and taking responsibility.

Five of the seven projects winning in 2017 referred to environmental sustainability, and one each to education for sciences and inclusive sport. The eight female and two male proponents were between 15 and 28 years old.

One winner was the „The Big Book of the Park“, a multi-faceted, multi-media tool to promote interest in nature and its preservation. It turns visitors into „scientists” through a simulated fieldwork experience, discovering species, learning to observe nature in detail and participating in biodiversity protection initiatives.

The School Budget was dedicated directly to schools and high schools so that students could learn, practice and decide together what to use the money for.

For 2019, the NPBs have been suspended. Time and resources will be used to finalise implementing the 2017 and 2018 projects.

One of the major reasons for this national experiment was the desire to create trust with citizens, particularly after years of economic struggles. When governments are faced with distrust, people often abstain from voting in elections as they feel their vote won’t make a difference anyway.

Participatory budgets encourage citizens to not only vote but also actively take part in public decision-making.

Portugal is the first country in the world to ever run participatory budgets at a national level.

According to Graça Fonseca, a major element that differs from usual politics is bringing people together and meeting with them in person. Further, a government team talked to people who submitted proposals to help them take full ownership of their ideas.

As with any experiment, there is room for improvement.

Portugal has a long experience of local citizens’ participation projects. At this level, it is easier to create new connections between institutions and the community. However, the national government is almost an abstract entity for many. So how can communication channels be improved here?

Some observers suggest putting in place intermediary bodies at regional levels. This would help to better take account of deprived areas and to include people who do not have access to the digital world.

The fact that Portugal ran national PBs as the first country in the world, is a success in itself. This was made all the more impressive as there were three target groups: citizens in general, youths and schools.

Sending out government staff to engage with people throughout the process and work with the proponents of the winning proposals turned out to be one of the success factors of this NPB experience.

By getting engaged in their national budget, citizens are encouraged to create networks. The competition of ideas among non-organised citizens has led to self-organised new networks.

People experience that their input and vote on initiatives they care about does have an impact.

If the Portuguese government continues and fine-tunes its efforts of having citizens participate in national budgetary decision-making, people will feel more empowered and will regain trust in political processes. Should this exercise become a tradition, it will have a transformative effect on politics for the benefit of all.